We all have an inner desire to look forever young no matter how old we get. But have you ever thought about looking old when you’re young? No Right. There is a  gym Guy names Pawel Ladziak age  who is now 35 year age and make makeup to look himself old.

No one wants to look old. Especially in this age of fashion and incredible beauty standards. The anti-aging industry is fast approaching a massive amount of $200 billion a year. Yes, you heard that right. $200,000,000,000 is being spent every year by people to look young.

But for Pawel Ladziak, a 35-year-old gym junkie, he’s spending his money on hair dyes and beard to look old. Like, a LOT older. Upon first glance, Pawel looks like a 60-year-old hunk. And even though aging up can be looked down upon, for Pawel, it brings out a lot more character. Have a look at his pictures.

Pawel is a personal trainer and Instagram Fitness model. He has over 335,000 followers on Instagram. He regularly posts photographs of workout routines and posing for Selfies.
His hair is dyed white to give him the appearance of being much older. He frequently is thought to be in his  60s.
Pawel began Bodybuilding when he was 16 years old. He goes by the name “Polish Viking”.

What about women, you ask? Well, his wife – a gorgeous woman – seems more than pleased with his transition.

Needless to say, he doesn’t spend his money on anti-aging creams.

So the Question is.  why is Pawel Ladziak Doing this all?

This weird obsession started when he started to go white years ago and made up his mind he didn’t like wanted the old boring regular look. So, he just went all in on the “old” look. And now, he frequently gets mistaken for a man in his 50s or 60s.

So what’s the main point of all this? Why does this young fellow want to look like an old grandpa? One word;  Because of His Instagram. account

According to Pawel, his hair started to grey years ago but he was not a fan of the greying, snowy-haired head. So he decided to leave behind the salt-n-pepper look and dye all of his hair into a more bright white.

Although he already had a massive following on his account, he noticed a huge increase in followers once he started to dye his hair all white. It all worked out in favor pretty well. He now has over 400,000 fans and a lot of sponsorship to keep him going. 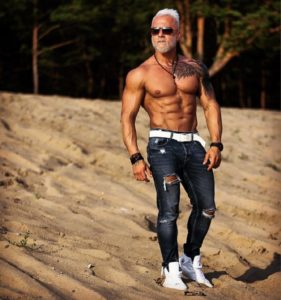 #Pawel Ladziak started going to the gym when he was just sixteen years old. But he wasn’t that serious until just a few years ago when he noticed people were following his transformation very fondly. Ever since then he’s been regularly posting his pictures on social media and frankly, we dig it!
Big supplement companies like to sponsor their products through him because all his followers are devoted fans who are interested in the “#gym” life. Now he likes to post his muscular photos comparing how is he looking today at how he looked 10 years ago.

And, of course, the casual picture of Pawel Ladziak hot wife… Because why not? 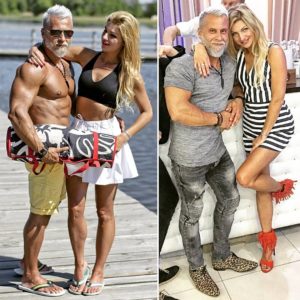 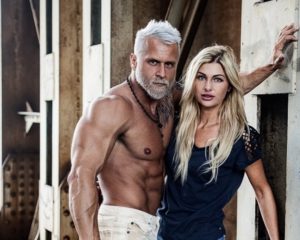 Let’s talk about His interest

He does not hesitate to show off his glorious beard. And why not? That beard is goals. Every now and then he can be seen advertising for his favorite beard products and giving tips to his followers on how to grow and maintain a thick luscious beard like him.

And as you may have noticed before, he loves tattoos as well. He has many sick tattoos all over his body and they really go well along with his looks and personality.

Despite his weird obsession, he is also a big inspiration for many people who are having difficulty to keep up with their gym routine. Because he frequently engages with his fans, his followers are constantly asking him for nutritional advice and workout routines. He does not hesitate to entertain the queries made by his avid followers.

There are three things he loves for sure; he body, his beard, and his beautiful wife ( Magdalena Magda ). There is not a single doubt that he is, in fact, a buffed up guy who built up his body through all natural means and we can probably take him as an example to not let life get in between our body goals.

5 Ways To Stay Motivated – How to get motivated to exercise

Is “DNA Diets” a pseudo Science?

rajatrrpalankar - February 4, 2018 0
We have said in our previous Diet Plan to GAIN WEIGHT | Meal 01 If you want to gain weight, then it is very important that you...

How To Protect Your Positive Vibes – My Lifehacks

rajatrrpalankar - December 6, 2019 0
Hello Superstars. I thought about it a lot and I decided to share my lifehacks with you. Why? Because I believe you. How To Protect...

rajatrrpalankar - December 23, 2017 0
The triceps brachii muscle (Latin for "three-headed muscle of the arm") is a large muscle on the back of the upper limb of many vertebrates. It is the muscle principally responsible for extension of the elbow joint (straightening...

rajatrrpalankar - May 15, 2019 0
Testosterone is a male hormone, basically, the male hormone is known because the male has to do more activity like lifting heavyweight, gaining bigger...

rajatrrpalankar - November 28, 2021 0
The Gym Fitness Industry, is in full boom, In recent years. With more people looking to improve their health and wellness, it’s never been...

Get Strong and Sculpted with These Deadlift Workout Tips

rajatrrpalankar - January 6, 2023 0
What is a deadlift? The deadlift is a strength training exercise that involves lifting a weighted barbell off the ground and standing up straight with...